Whatever you do, don't run. Stay right where you are. He picked up your scent long before you ever felt like something was lurking behind you... 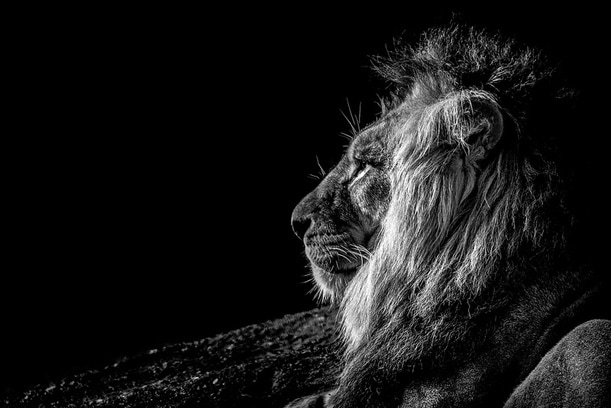 Those who have caught sight of a malion will most likely tell you that they are the strangest combination of two species they have ever seen--provided you believed what they were telling you in the first place. Malions look very much like humans, save for some feline-like facial features. The males (which are most likely to be spotted by humans, as they are the ones who do the hunting) have long mane-like hair, where the females here in British Columbia tend to keep their hair cut short for practical reasons. In the media, malions have sometimes been mistaken for the Sasquatch or Yeti, as they inhabit the remote mountainous areas of the world where they attempt to roam free from the public eye--in B.C. (or Pacific Third, as they call it) they have been spotted in the Coastal Mountains, and twice in the Rockies. In the higher populated areas of the world, malions have mined tunnels below the surface so that they have closer access for communication with their trusted human friends. They also thank the Creator every morning prayer for such exceptional technological advances that they no longer have to use post or messengers.

Now I don't speak for the Sasquatch but I do know that if you've ever seen a malion, it's most likely been a male. Females are highly protected in the malion community, especially since their numbers have been dwindling over the past few centuries (due to birth complications, and the fact that they are easier to capture). If you ever do see a female, look again, because her mate will not be more than twenty feet away and has probably been watching you the entire time. Never ever approach a female, especially one with amethyst eyes (indicating pregnancy) or a cubshen (a baby/child); you will not live to tell of your sighting, and if you do, you may never see the light of day again. That is, until they decide whether they can trust you or not. I speak from experience.

Why the over-protectiveness, you ask?

Well, that's easy. They're much more scared of you, than you are of them; and you'd feel the same way if you were in the midst of being hunted into extinction.

Who is hunting the malions?

The Vykhars (a malion word for hunter)
Warren, King Jared's son, became the first Vykhar after serving a twenty-year prison sentence when his father was killed by Ranion. He was seeking revenge and began offering small gold rewards for the return of the head and hands of any malion. In a starving country, people would do almost anything to survive, so naturally, they began hunting the malions along with Warren's band of bastard brothers. "The King and the Malion Healer" is the fairytale I have written that tells the story of Ranion, King Jared, and his beautiful Queen, Alysia. There are four other fairytales in the collection "Moonstone, Mae, and Malion Tales".

Long, long ago, the great Immortal Creator (Lorken) looked down upon the world with saddened eyes. Many species, including humans, were falling ill and passing much too soon in life, fighting among themselves and polluting Earth, and he felt that he needed to do something about it.  Therefore, he took a mortal malion form and had three sons with three human females, one from each area of the world. He stayed on Earth long enough to see his sons grow into their teenage years, teaching them about herbal medicine, and instructing them to go forth into the world and help all species live longer, healthier lives. He hoped that, in turn, we would also begin to have a higher respect for the ground that gives us food and life.  Those three sons became the malion leaders of the each of their third of the world: Pacific, Asian and Eurafrican.  Ranion, the malion leader from the story "The King and the Malion Healer", is the great, great, great, grandson of the first pacific leader. Rion and Rasadian are direct descendants of Ranion.

Not a chance. The fact that they have healing hands makes them less susceptible to sickness and disease, so many will die from natural causes (if they are not captured first); however, the life expectancy of a malion is approximately 120-130 years. They firmly believe in reincarnation, so in that sense, they believe immortality comes in the form of a brave and wonderful soul that will return to Earth once again. They also believe in soul searching. Sensakuru is a malion term for "the other half of my soul". Every malion believes they have one soul mate, one soul that completes them, one soul that they hope to find in each lifetime. Some are lucky to have located them, others are not; and if they do in fact find them, a deeper bond is revealed upon the first healing or mating--something only the other half of your soul can do. The deeper bond comes in many forms, but it is only something that only occurs between those two individuals.

Tell me about the healing hands.

The male malions have the ability to heal using their hands. It is a trait that is carried on the Y chromosome, so it is not something that the females can do. With that, they can heal fresh wounds on a cellular level (viruses included). They cannot take away scars or change genetic dispositions. In very unique circumstances, they can even bring a species back to life if the soul has not already departed (the window of time is seconds to almost a minute, so the chances are slim). Healing is a very intimate process, and it is only meant for the cubshens of a male's family, or for the male's mate. Healing is one of the deepest forms of affection that a male can show his family or mate aside from other forms of physical intimacy; to heal without permission or specific instruction from another male is similar to adultery and high treason. Forgiveness does not come easily. It is also a terribly exhausting procedure for the male malion.

So the males can heal, but what can the females do?

Females are incredibly fast runners. And because they are significantly smaller (aproximately 5'9"-6'0 feet in height and usually around 140-150 pounds), they frequently out-run the males. In pursuit, this comes in very useful, as males will be the one to stay back and fight so that the females can escape. They are also very attune to the emotions around them, which comes in useful when another malion is in need of support, as no one is ever left to struggle on their own in the malion community.

What do the malions do for fun?

The most common forms of entertainment for malions are socializing over food, playing cards and telling stories, or spending time above in their remote cabins above (bornskav, as they call it). However, every once in a while, when permission has been given and guards are available to watch the perimeter, the teenage males and females go above to play a game called Xarfathens (meaning capture). Because it requires so much room, it is usually played at least a hundred kilometres away from civilization. In the game, females and males are paired up (which is usually easy, because most are already dharkun and wharla); the females go to one edge of the perimeter, the males go to the middle. The object of the game is for the females to get to a pre-designated point without their male counterpart catching them. It's a boys-chase-girls/hide and seek game, but it also serves as practice in the case of an emergency. Because the males are generally louder and the females are generally quieter, it's not easy for the males. The females usually team up and try to mislead the males by giggling or making some clicking/chirping noises, and then bolting away, and the males have to strategize because the females are so much faster than them. It's a very intense game and super fun. The winners are the first male to capture his female-counterpart, and the last female to not be caught--which usually results in some serious teasing for her male counterpart, but all in good fun. To be captured first, as a wharla, means you have some alone time with your dharkun, and that normally leads to more chasing and fun within the perimeter, as the rules of Seconsians don't allow for much alone time between dharkuns and wharlas.

What are the rules of Seconsians?

The rules of Seconsians govern the way a male can court and spend time with a female before they are a mated pair. Seconsians means "courting" in malion. Like most laws in society, sometimes they are not followed. To be caught breaking a Seconsian law results in extensive grounding and punishment, and malion parents coming down very hard on their teenage cubshen--separating them for a long period of time, or ending their dharkun/wharla relationship, in some cases. The laws are as follows:

1.       An un-mated male may not be alone in his chambers with an un-mated female, if so, the door remains unlocked and open, or at least ajar.

2.      An un-mated  male may not heal any female unless he has been given specific instruction by the head male of a family during which time his is going to be away (usually this is assigned to an uncle or grandfather, and everyone always has someone assigned to their family, like we have wills and legal guardians).

4.      Sex before becoming a mated pair is not permitted, and most (but not all) malions take this very seriously.

5.      A dharkun and wharla may spend as much time together as they please, but the dharkun may not take a wharla away from her family’s mainstay. She is always to be within the vicinity of her family, female friends or extended family. Because of this, most malion teenagers hang out in large groups together--which is a lot funner, anyway. Above, in remote areas, it’s also safer this way. Groups of families whose children are dharkun and wharla will often travel and holiday together. New relationships are honoured and given every opportunity to blossom, and dharkuns who are very serious about a wharla, will do everything they possibly can to please his wharla's family.

There are also specific safety regulations that govern the way females can go above:

1.    Under no circumstance is a female to go above without at least one male, which can be her dharkun (if prior permission is given by her parents), forthus, bastvina, or other specifically designated full grown male. Safety of females and cubshen in the malion community is taken very seriously, as is their virtue and innocence.

2.    A pregnant female who wishes to go above must be accompanied by three full grown males. In the case of an emergency, one will need to carry the pregnant female, the other two must be able to stay back and defend against the danger so that the female can be taken to safety.

3.    A female with cubshen who wishes to go above must be accompanied by as many full grown males that it takes to serve a 1:1 ratio for her and her cubshen, plus two more males to defend them in the case of an emergency.

It sounds very strict, but most females are terrified of being alone in the above world. Consider it the same fear that most humans experience if they were asked to walk down a dark unlit alleyway at night--most just don't do it.